Meet an inspirational woman in wine

Today on International Women’s Day, the world is celebrating and championing women, and the wine business (traditionally a male-dominated industry like so many) is no different. It seemed appropriate therefore that I interview an up-and-coming female British winemaker making waves in Bordeaux. Meet Dawn Jones-Cooper.

Dawn is an inspiration. In the space of just over 10 years she has gone from nursing an embryonic idea of being a winemaker to being a successful producer of top-quality dry white Bordeaux wines, including a couple of Decanter medal award-winners, despite some not insignificant challenges along the way. I sat down with Dawn over a glass of her delicious wine and asked her to tell her story…

Can you tell us the story of how you became inspired to buy a vineyard?

My husband Jay and I had been working for many years in London, he as an independent financial advisor and I as a hairdresser. In 2005 we finished the total rebuild of a Dunkirk Little Ship (The Gainsborough Trader) which we had been living aboard for sixteen years. We needed our next challenge and decided that we would seek a riverside property in Europe. We looked thoroughly and eventually settled on the Monfaucon estate, just 10 minutes south of St Emilion in the Entre Deux Mers in Bordeaux. The estate had an old vineyard attached. After many discussions about the similarities of trimming vines and hair (!), we decided to ask a professional (Rebecca Lamont of Berry Bros. & Rudd) if she knew of any short courses in viticulture. She responded: ‘I have two words for you – Plumpton College’. By the end of May 2006 I had signed up for a four-year, part-time degree in Viticulture and Oenology. The more I progressed through the course, the more I realised how diseased and neglected the current vineyard was, so we decided to rip out the old vines and start again from scratch.

The Monfaucon estate from the air

What have been your biggest challenges along the way?

Challenges – where do I start?! First of all, building a new business that needs a time commitment of 52 weeks a year whilst at the same time running two businesses in London to fund it, meaning constant commuting back and forth between the UK and France to ensure that all the work in both places got done to a high standard. I think we have had about 12 days off in total since 2010 – our choice, but a challenge nonetheless! Other challenges: living in a caravan on the estate for four years before we finished our loft apartment; building the vineyard from scratch, jumping through the hoops in order to achieve organic certification (more on that later); making our first wine on a micro budget…and a major one: losing 70% of our crop in a sudden 25-minute hailstorm back in 2013.

Luckily we were welcomed into our French community with enthusiasm and open arms…although the welcome was quickly followed by the friendly comment ‘you know it’s very important that your first wine is good, to gain the respect of the other local producers’. No pressure then!

Tell us about your philosophy and your wines.

By chance many of the projects I was assigned at Plumpton were either organic or biodynamic-based, which meant I spent a lot of time researching these methods. The more I looked at those ways of farming, the more I decided they were the methods I wanted to follow. As a result our wines now have organic status (meaning amongst other things that their level of sulphites is much lower than in conventional wines), and in addition my viticultural and vinification methods follow biodynamic principles. I would like to achieve biodynamic certification as only 3% of growers in the whole Aquitaine region have achieved this, but there’s a way to go yet.

Getting down-and-dirty (literally!) in the vineyard

Other elements of our philosophy include the production of varietal wines (unlike most white Bordeaux which is a blend) and a drive towards lower alcohol. Many wine drinkers these days are more health-conscious and moving away from 13%+ wines; we also believe that for white wines in particular a higher alcohol content can mask the fruit flavours.

We currently produce seven white wines: a Muscadelle (silver medal winner at Decanter last year), a Sauvignon Blanc (bronze medal winner), a Semillon and a blend of all three; in addition we have a Cuvée Prestige range with some gentle oak character, encompassing a Sauvignon, a Semillon and (unusually for Bordeaux) a Chardonnay which has proved very popular. We believe in quality rather than quantity, pressing the grapes very gently to extract only the finest juice. Everything is temperature-controlled with gentle handling, resulting in premium handcrafted wines we are extremely proud of.

What’s the story behind your catchy brand name ‘Nobody’s Perfect’?!

‘Nobody’s Perfect’ as a brand name is an eye-grabber. It expresses that feeling of enjoying a naturally good wine in a relaxed and comfortable way, and in the event of quickly finding your way to the bottom of the bottle, one can easily call on that exact same expression, just as the French do with a shrug of the shoulders (“personne n’est parfait!”) whilst gleefully applying the corkscrew to a second one…

What are your plans for the future?

At Plumpton I was advised, quite rightly, to ‘find a niche market’, and so Jay and I found inspiration in wanting to be one of the few vineyards in Bordeaux to produce sparkling wine in-house from start to finish. This is very unusual as most sparkling producers make the base wine and then allow the local syndicate to finish the rest: second fermentation, riddling, disgorging, dosage and corking. We are experimenting with our sparkling as we speak, with the first production currently ageing on the lees – watch this space. In addition, we have just planted a further hectare of vineyard including some red varieties, and are moving forward with plans to develop an educational experience for visitors to learn the hands-on nuts and bolts of viticulture and vinification. So there’s a lot of work ahead – but it’s very satisfying.

It’s all glamour in the wine business!

And finally.....what would be your desert island wine...no budget restrictions?!

It would have to be either a Château d’Yquem from 1999 or a really top-class Amarone della Valpolicella!

In the UK you can drink Dawn’s wine at the lovely 108 Brasserie in Marylebone (from mid-March) and at the esteemed wine members’ club at 67 Pall Mall. You can also buy her wine through http://www.20h33.co.uk/, and follow Dawn on Twitter here. For trade enquiries you can contact her on dawnjc@btconnect.com.

What does 'organic wine' actually mean? 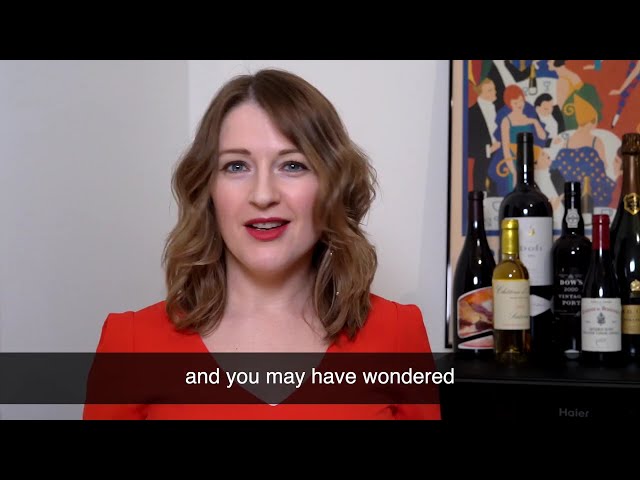 But isn't all wine vegan?

How much SHOULD I spend on a bottle of wine?

But it just smells of wine!

This wine smells of my grandmother's attic!

Show me some skin

What exactly IS a full-bodied wine, anyway?

Read this and salivate!